Daphne in the Brilliant Blue Wiki
Register
Don't have an account?
Sign In
Advertisement
in: Article stubs, Characters

This article is a stub. You can help Daphne in the Brilliant Blue Wiki by expanding it.

Yu Park (박유) is the hand-to-hand combat specialist and strength of Nereids.

Yu Park was a convicted felon who was captured by Rena Honjo of Nereids. However, Rena offered her a job as part of the crew and Yu then began to develop a respect for her. She is taciturn, ridiculously strong, and good with hand-to-hand combat, although she is fond of animals. Yu does not get along with Gloria and constantly hits her. Despite that, they make a good team as Yu's fighting skills go well with Gloria's shooting.  Yu's fighting style is similar to taekwondo. 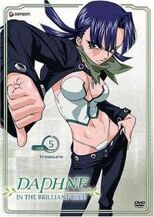